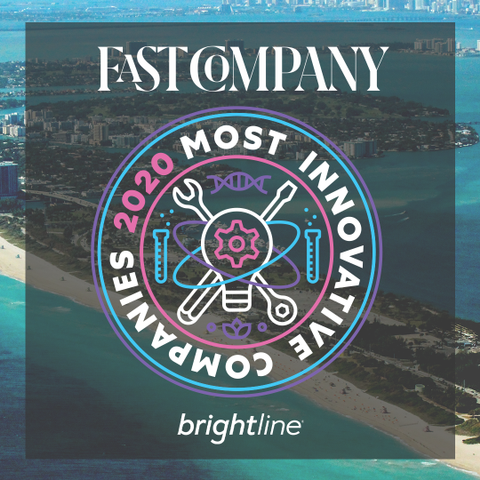 Brightline has been named to Fast Company's prestigious annual list of the World's Most Innovative Companies (MIC) for 2020.

The list honors the businesses making the most profound impact on both industry and culture, showcasing a variety of ways to thrive in today's fast-changing world. This year's MIC list features 434 businesses from 39 countries.

“It's an incredible honor to be recognized by Fast Company as one of the World's Most Innovative Companies for 2020 alongside some of the most progressive companies that are disrupting their industries,” said Brightline President Patrick Goddard.  “Brightline is reinventing passenger rail in America and in an age when people are looking to get out of their car, we are enabling a car free lifestyle that was previously unimaginable.”

Brightline is the first privately funded passenger rail system in America in over a century. Providing fast, efficient, hospitality-driven transportation featuring the latest in customer-friendly amenities, Brightline currently operates in Florida between Miami, Fort Lauderdale and West Palm Beach, with plans to expand to Orlando, Boca Raton, Aventura and PortMiami. The company is also on track to break ground between Las Vegas and Southern California in 2020.

In 2019, during Brightline's first full year of service, the company surpassed one million riders since service first began in January 2018, which roughly translates to 400,000 less car trips on the road, a reduction of 15 million pounds of CO2 emissions and 750,000 less fuel gallons on the road. Also in 2019, Brightline broke ground on the nation's largest privately funded infrastructure project to expand passenger rail service from South Florida to Orlando.

This year, Brightline will expand its service in South Florida to connect its existing service to Boca Raton, Aventura and PortMiami.  Also this year, Brightline will break ground on the federally approved corridor between Southern California (Victorville) and Las Vegas as well as 38 acres of land adjacent to the Las Vegas strip.  For the forthcoming service on the West Coast of the United States, Brightline is planning for high speed electric train sets.

Fast Company's editors and writers sought out the most groundbreaking businesses on the planet and across myriad industries. They also judged nominations received through their application process.

The World's Most Innovative Companies is Fast Company's signature franchise and one of its most highly anticipated editorial efforts of the year. It provides both a snapshot and a road map for the future of innovation across the most dynamic sectors of the economy.

“At a time of increasing global volatility, this year's list showcases the resilience and optimism of businesses across the world. These companies are applying creativity to solve challenges within their industries and far beyond,” said Fast Company senior editor Amy Farley, who oversaw the issue with deputy editor David Lidsky.

Fast Company's Most Innovative Companies issue (March/April 2020) is now available online at fastcompany.com/most-innovative-companies/2020, as well as in app form via iTunes and on newsstands beginning March 17, 2020. The hashtag is #FCMostInnovative.

Brightline is the first privately funded passenger rail system in America in over a century. Brightline is designed to reinvent travel and take cars off the road by connecting city pairs and congested corridors that are too close to fly and too long to drive. Providing fast, efficient, hospitality-driven transportation featuring the latest in customer-friendly amenities, Brightline currently operates in Florida between Miami, Fort Lauderdale and West Palm Beach, with plans to expand to Orlando, Boca Raton, Aventura and PortMiami. The company is also on track to break ground between Las Vegas and Southern California in 2020.

Fast Company is the only media brand fully dedicated to the vital intersection of business, innovation, and design, engaging the most influential leaders, companies, and thinkers on the future of business. Since 2011, Fast Company has received some of the most prestigious editorial and design accolades, including the American Society of Magazine Editors (ASME) National Magazine Award for “Magazine of the Year,” Adweek's Hot List for “Hottest Business Publication,” and six gold medals and 10 silver medals from the Society of Publication Designers. The editor-in-chief is Stephanie Mehta and the publisher is Amanda Smith. Headquartered in New York City, Fast Company is published by Mansueto Ventures LLC, along with our sister publication Inc., and can be found online at www.fastcompany.com.