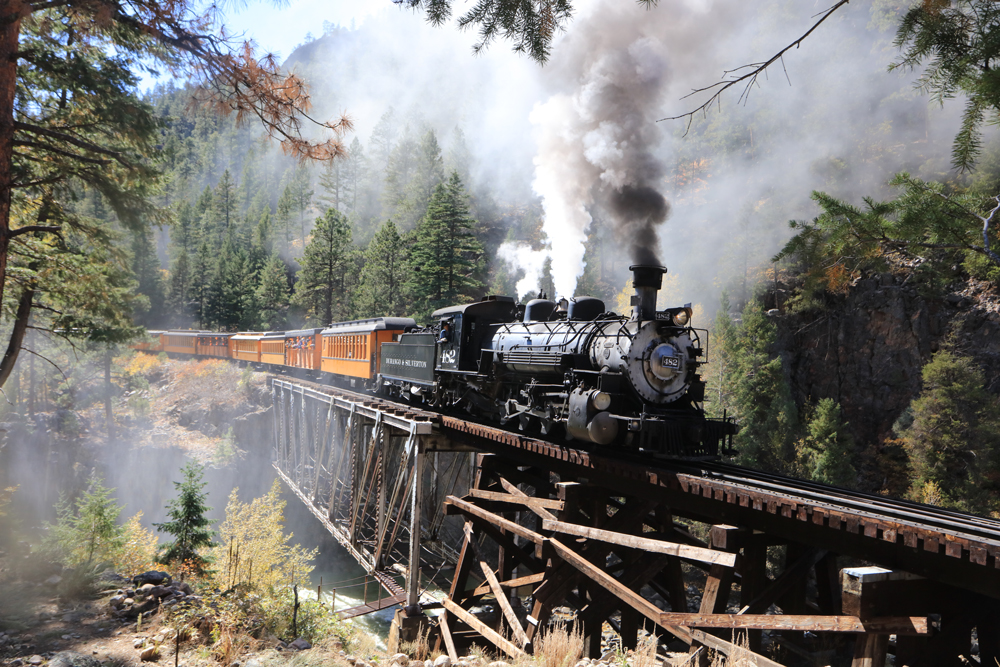 Presented in partnership with Expedia Group, the film will lead international audiences across the United States’ scenic byways, ancient homelands, little known trails, and hidden gems that form the natural tapestry of America. John Herrington and Ariel Tweto will help showcase some of America’s greatest outdoor experiences from kayaking Oregon’s stunning coast, to exploring the ancient canyons of the Southwest, experiencing the wilds of Alaska, walking the Appalachian Trail, and more.

“In the spirit of our hit films, “National Parks Adventure” and “America’s Musical Journey” we are thrilled to partner again with MacGillivray Freeman Films and Expedia on the release of our third giant screen film,” said Christopher L. Thompson, president and CEO of Brand USA. “Our latest film takes you on a cross-country journey to scenic byways, ancient homelands, little gems, and hidden trails that form the natural tapestry of America.”

“This new film will take audiences on an exciting journey of America’s many outdoor wonders,” said Shaun MacGillivray, the film’s producer and president of MacGillivray Freeman Films. “We hope that this immersive, giant-screen experience will encourage travelers to connect with nature and seek new experiences and adventures in the USA.”

“We are proud to work with Brand USA and MacGillivray Films on this third film that showcases the natural tapestry of America’s outdoors,” said Jennifer Andre, senior director of business development at Expedia Group Media Solutions. “We are encouraged by the success of the past two films, and believe that this new film will encourage even more international travel to the United States.”

Based on research conducted by Phocuswright and Oxford Economics, Brand USA’s screen strategy has yielded tremendous success. According to the study released in 2018, “National Parks Adventure” generated nearly $700 million in incremental visitor spend and enticed 172,335 incremental visitors to the United States, creating a total impact to the U.S. economy of $1.5 billion. The study includes analysis of six markets – Brazil, Canada, China, Germany, Mexico, and the United Kingdom – finds a marketing return on investment of 56:1. Both films have also been recognized by the cinematic industry with numerous awards, including Best Film of 2016 in the Short Subject category at the Giant Screen Cinema Association’s Achievement Awards (“National Parks Adventure”) and Best Audience Recommendation Award in the science and technology category at the 2018 Beijing International Film Festival (“America’s Musical Journey”).

The teaser trailer for “Into America’s Wild” is available at IntoAmericasWild.com.

For industry or partner information about Brand USA, visit TheBrandUSA.com. To discover more about the USA and the boundless diversity of American travel experiences and authentic, rich culture, please visit Brand USA’s consumer website VisitTheUSA.com and follow Visit The USA on Facebook, Twitter, and Instagram.

About MacGillivray Freeman Films
MacGillivray Freeman Films is the world’s foremost independent producer and distributor of giant-screen 70mm films with more than 40 films produced for distribution in IMAX® and giant-screen theaters to its credit. Throughout the company’s 50-year history, its films have won numerous international awards including two Academy Award® nominations and three films inducted into the IMAX® Hall of Fame, which recognizes the most acclaimed and successful films of the giant-screen industry. MacGillivray Freeman’s films are known for their artistry and celebration of science and the natural world. It is the first documentary film company to reach the one-billion-dollar benchmark for worldwide box office. For more information about the company, visit MacGillivrayFreemanFilms.com.

About Expedia Group
Expedia Group is the world's travel platform. We help knock down the barriers to travel, making it easier, more enjoyable, more attainable and more accessible. We are here to bring the world within reach for customers and partners around the globe. We leverage our platform and technology capabilities across an extensive portfolio of businesses and brands to orchestrate the movement of people and the delivery of travel experiences on both a local and global basis. Our family of travel brands includes: Brand Expedia®, Hotels.com®, Expedia® Partner Solutions, Egencia®, trivago®, HomeAway®, VRBO®, Orbitz®, Travelocity®, Wotif®, lastminute.com.au®, ebookers®, CheapTickets®, Hotwire®, Classic Vacations®, Expedia Group™ Media Solutions, CarRentals.com™, Expedia Local Expert®, Expedia® CruiseShipCenters®, SilverRail Technologies, Inc., ALICE and Traveldoo®. For more information, visit ExpediaGroup.com.

Brand USA, the destination marketing organization for the United States, was established by the Travel Promotion Act as the nation's first public-private partnership to promote the United States as a premier travel destination and to communicate U.S. travel policies and procedures to worldwide travelers. The organization’s mission is to increase international visitation to the USA in order to fuel the U.S. economy and enhance the image of the United States worldwide. Formed as the Corporation for Travel Promotion in 2010, the public-private entity began operations in May 2011 and does business as Brand USA. According to studies by Oxford Economics, over the past five years Brand USA's marketing initiatives have helped welcome 5.4 million incremental visitors to the USA, benefiting the U.S. economy with more than $38 billion in total economic impact and supporting, on average, more than 51,000 incremental jobs a year.

For industry or partner information about Brand USA, visit TheBrandUSA.com. To discover more about the USA and the boundless diversity of American travel experiences and authentic, rich culture, please visit Brand USA’s consumer website VisitTheUSA.com and follow Visit The USA on Facebook, Twitter, and Instagram.